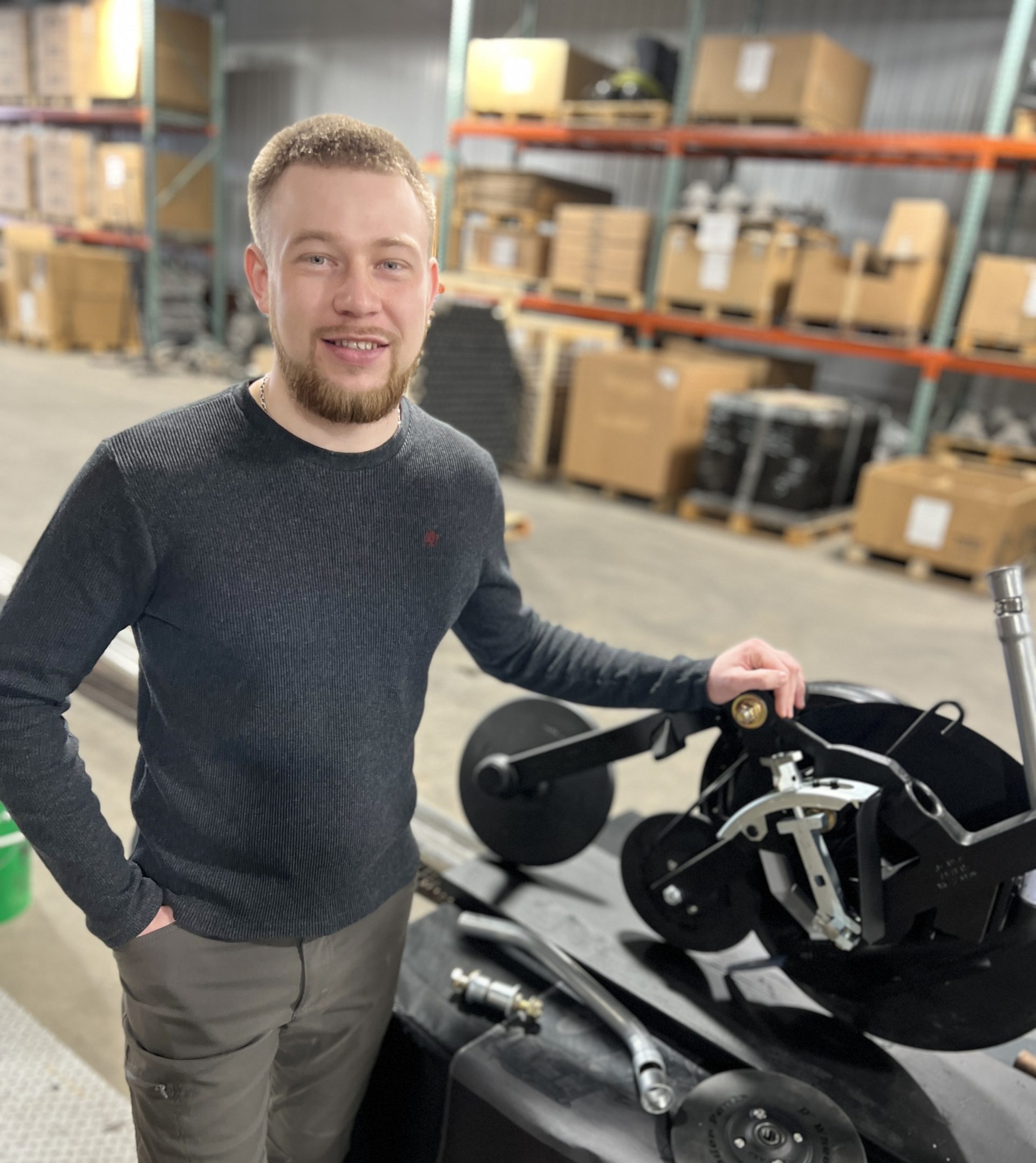 Past Employment: Prior to coming to Air Seeder Parts, LLC, Artem was employed by Nikolaisen, LLP headquartered in Egeland, ND.  Nikolaisen raises wheat, canola, soybeans, corn, barley, and pinto beans. Artem was a farm machinery operator when starting and eventually took on more mechanic work, maintaining and fixing equipment. His other duties included planting, field work, spraying, combining, running grain cart, running an excavator for tree removal, and anything else that needed to be done.

Artem’s interest in American farming began at an early age. After his second year in college, an opportunity took him on a year long internship at a livestock farm in Wisconsin. This was his first trip to the United States. He was only 19 years old at the time. It was a big commitment, but he wanted to learn the mechanization of a livestock farm – how they take care of their equipment and operate a farm in the United States. “I wanted to come to the United States to learn how things happen here compared to in Ukraine,” said Artem.  He returned to Ukraine to continue his education and returned once again to work on a grain farm. He also took some online classes during this stay, then returned to Sumy to finish school and test.

Third Time’s a Charm: Artem’s third trip to the United States was for his job at the farm in Egeland, ND. In addition to working with Nikolaisen, LLP, Artem worked with Ukrainian farmers to find, inspect, negotiate pricing, and purchase John Deere equipment. “There is no John Deere Factory in Ukraine,” said Artem, “and everyone wants John Deere combines, sprayers, and planters.” After making an equipment purchase, Artem also arranged shipping from where purchased via trucking company, then overseas shipping to Ukraine. In the last 2 years, he has purchased and shipped many pieces of equipment for and to farmers in his home country from the US and Canada. Since Russia began the war, Ukrainian farmers purchasing equipment has decreased due to risk. Farms are working to get by with what they have until there is more stability in their country.

Hobbies/Interests: When he’s not working, Artem likes outdoor activities, skiing, and anything related to farm machinery.

Interesting Fact About Artem: Since he was a kid, Artem always loved farming. Being a part of the processes of raising and taking care of crops was something he always wanted to do. One thing that sparked his interest in traveling to and working in the United States was our good movies – like Star Wars, Transformers, and Home Alone.

Interesting Fact About Ukraine: The Russian invasion of Ukraine has resurfaced a decades-old question: Is the country called “Ukraine” or “the Ukraine”? “The Ukraine” was the way the Soviet Union referred to the area during Soviet rule. As an independent country, it is simply called “Ukraine.” There are only 2 countries that presently use the word “the” before their larger titles – The Bahamas and The Gambia.

What are you most excited about in your new position? “Since I’ve been working at the grain farm, I’ve been running the air seeder and have been facing the same issues that Air Seeder Parts, LLC have come upon. I’ve always had ideas on how to improve things. Now, I’m at a company that fixes these issues. I can bring my ideas to work, solve issues, make good products, and share the help with products with other farmers.”

Welcome, Artem! We are happy to have you here.

Q: Why did you choose University of North Dakota and Mechanical Engineering?

A:  I chose UND because it’s close to home, affordable and offers a quality education. Having talked to various employers and engineers in the area it was obvious that the value graduates from UND and the knowledge they graduate with.

Q: What type of work will you look for following graduation?

A: I am not completely set on an industry that I want to focus on yet, but I am interested in learning more about the aerospace industry. I love the outdoors as well so it would be fun to get into something where I can be involved in something related to that.

Q: How did you hear about the internship?

A:  I got in contact with Air Seeder Parts through a mutual friend, but I believe they initially found my resume on Indeed.

Q: What on the job tasks does your internship involve?

A: Being that it is a small company I get to do all different kinds of things that engineers in a larger company may not get to do. I do a lot of testing for new products that we are trying to get into production along with designing new products. I also get to work with manufacturers to get prototypes made and ready for production.

Q: What do you like about Air Seeder Parts, LLC?

A: I like the atmosphere; it is relaxed enough that you don’t have to be stressed all the time but there is still a push to innovate which is a good thing. Because the company is smaller, and everyone is together under one roof we are able to get projects relatively quickly compared to many other companies.

Q: What surprises you most about being in the workforce?

A: I can’t think of anything that surprised me necessarily, but I will say that it is sort of eye opening to get into an industry like farming and see all the opportunities that are out there that you wouldn’t even think of without being in it.

Q: Do you feel your experience from Air Seeder Parts is beneficial and why?

A: Yes, it is definitely beneficial because I have learned a lot of stuff that you would never learn without doing it. There are many things that you maybe hear about in school but don’t really understand until you have to do it, especially when it comes to communicating with other companies to get things done.

Q: If asked, what would you tell classmates about the benefits of an internship?

A: I would tell that there are tons of benefits. We learn a lot in school but if we never learn to apply it, it’s kind of useless. It’s neat to be at work and have an issue that you know how to solve because of something you just learned in school. There are many things that they can’t teach you in school but that are going to be necessary for us in our careers. Also, having an internship is a great way to figure out which direction you want to aim for while in school. It can help you determine if you’re in the right major or what electives you want to take to focus on a specific field.

If you are interested in an internship or career at Air Seeder Parts, LLC, visit the careers page on our website at www.airseedperparts.com/careers.

Air Seeder Parts Job Duties: General design, and optimization of sheet steel, and plastic parts for manufacturing. Use of rapid prototype technologies to further developments within the design and manufacturing process. Basic fabrication, and troubleshooting, as well as ordering materials to maintain prototyping abilities.

One (or more) interesting facts about Scott:

Scott started work at a computer store, then moved to a tractor carburetor shop, and finally the Seed Conditioning department of Iowa State. He grew up working on 1970s motorcycles and vehicles – cool!

For about 2 weeks Scott held a “world record”, was part of a team of 4 that assembled a John Deere M Tractor from bare engine and transmission to running and driving in around 30 mins. (He was meant for this position!)

Hey Scott – What are you most excited about in your new position? Overall, I’m looking forward to getting into a project and running with it. Excited to join the team here at Air Seeder Parts.

(Do fish drink coffee? Maybe those ones with the bulging eyes.)

Welcome Scott! We are excited to have you on our team.

Q: Why did you choose University of North Dakota and Mechanical Engineering?

A: I came to UND to study aviation. I decided that the hours of a commercial pilot weren’t for me. I changed my major to Mechanical Engineering because it always interested me. I like engines and cars – anything with wheels and tires. I like physics and math, which steered me toward engineering.

Q: What type of work will you look for following graduation?

A: Something to do with 4 wheels – Car or Off-Road Industry.  I’d like to stay in the Midwest, not necessarily North Dakota.

Q: How did you hear about the internship?

A: I found the internship post on Indeed. I completed an application and had an interview, which was good experience in itself.

Q: What are the details of your internship?

A: My internship is a full semester. I work full time, Monday-Friday and receive 2 credits.

Q: What do you like about Air Seeder Parts, LLC?

A: My position at Air Seeder Parts, LLC allows me experience in all aspects of mechanical engineering from designing to seeing and assembling a final product.

Q: What surprises you most about being in the workforce?

A: Even though I still have a lot of technical classes to take, I feel comfortable with my engineering knowledge and what I’ve learned so far.

Q: Do you feel your experience from Air Seeder Parts is beneficial?

A: Yes. This internship has allowed me to see all aspects of engineering process to help determine whether I have more interest in becoming a design engineer or manufacturing engineer.

Q: If asked, what would you tell classmates about your internship?

A: I have had a great experience and it has been very beneficial to work here. We have 3D printers at school, but are not able to access them to change settings, etc.  This is much more hands on and it’s pretty cool to have a high-end resin printer to work with.

Q: Is there anything else you’d like to add?

A: I like that Air Seeder Parts is a small company. I get to experience all aspects of a position and receive an overview of everything. I’m able to work with every department within the company as well as the manufacturers that produce our parts.  There is equipment right on site, so I can see how the end-user utilizes what we design and create for them. I’m grateful for the support I get from co-workers. The best part is that you are not constrained in what you do, yet there is guidance when needed.

If you are interested in an internship or career at Air Seeder Parts, LLC, visit the careers page on our website at www.airseedperparts.com/careers.

The stainless-steel Double Shoot Air Manifold replaces your current (and most-likely corroded) piece. This unit connects the air hoses to the pipes on the cart where the most corrosive substances come in contact. Our stainless-steel replacement is far less prone to corrosion, and we recommend getting ready for the fall by planning ahead and replacing this part today!

Purchase at your local John Deere dealer or at aiproducts.com.

We have more new and innovative parts to showcase for the second quarter of 2018.

We all know that an efficient air system ensures consistent product delivery. When the undersides of your tower covers on your equipment’s secondary manifolds start to wear and develop holes, your efficiency goes out the window.

Using silicone, you can easily install this over your existing worn-out covers or place it on your new ones to extend their life. If saving time and money is your thing – and we know it is – our new stainless steel manifold cover will help get you there.

Purchase at your local John Deere dealer or aiproducts.com.

This website uses cookies to improve your experience. We'll assume you're ok with this, but you can opt-out if you wish. Read More